Positive frequencies are displayed only.

For a Periodic Function, the values given by the Discrete Fourier Transform will equal the Fourier coefficients, calculated for the original continuous function, as long as the following conditions hold: We can use this property to check that the values found from the discrete calculation agree with those found for the original continuous function.

The function cos(pi*t) has fundamental period 2 and frequency 0.5, it has an amplitude of 1 and phase of zero..1 The Fourier series2, in amplitude and phase form, gives 1 for the amplitude at a frequency of 0.5 and a phase of 0, and an amplitude of 0 for all other frequencies. If we choose use plotXpose and choose a sample interval less than or equal to 1/(2*0.5) and an axis range which encompasses a whole number of periods of the function we should get the result of approximately 1 for the amplitude and 0 for the phase at a frequency of 0.5 and zero amplitude elsewhere.

There follows a short explanation of the relationship between a Fourier Series of a periodic function and the Discrete Fourier Transform of the sampled function.

Supposing we have a periodic function, f(t), with fundamental period, T , then we have seen 2 that f(t) can be represented by the complex form of the Fourier Series: 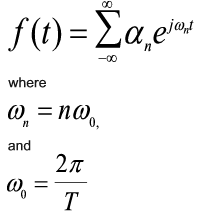 We now look at the problem of finding a Fourier series of the discrete function, which results from sampling a continuous periodic function. In Chapter 1 of 'Mathematics for Electrical Engineering and Computing' we considered the problem of sampling a function. The sampling theorem states that to represent a frequency of fmax the maximum sampling interval that can be used is h = 1/(2fmax). Another consideration is that we want to sample so that we get an exact number of points in a single period (otherwise the discrete representation of the function will not have the same period as the original function). In which case if we have N intervals in a single period we have

This shows that for a function, that can accurately be represented by a sampled function, the maximum value of n for which the Fourier coefficient is non-zero, must be n=N/2 where N is the number of sample points in a single period. We now have a finite sum for the Fourier series:

For a function that can be represented at the sample points, t=mh, by the discrete function fm=f(mh) then we get

To find the fourier coefficients we approximate the integral by a sum. We use the simplest formula for the integral, where the function is approximated as a number of rectangles of height fm and width h (the sampling interval). In this case we get:

So we find for a discrete function fm the Fourier series is:

where the Fourier coefficients are given by:

The amplitude and phase form of the Fourier series is:

The relationship with the complex coefficients is given by: 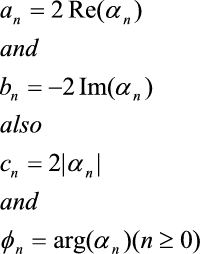 The vertical axis represents amplitudes or phase values. When the Fourier Transform is first calculated the range is calculated from the maximum and minimum values found for the amplitude spectrum or phase. To change the amplitude range tap the Settings icon on the Frequency tab. This will produce the "Amplitude Range" window displaying the current minimum and maximum displayed values for the amplitude or phase. Enter new values and select OK. The drawing is re-displayed using the new axis limits.

The frequency-axis range is always set from 0 to 1/(2*sampling interval). Negative frequency values are not displayed.

Google Play and the Google Play logo are trademarks of Google LLC.
Versions will shortly be available for iOS and Windows.

plotXpose app is a companion to the book Mathematics for Electrical Engineering and Computing by Mary Attenborough, published by Newnes, 2003.